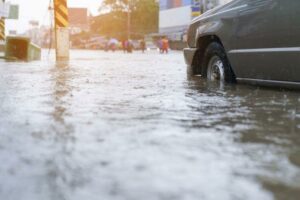 With many people in KZN having suffered extensive damage to their properties as a result of severe flooding, it is imperative to first distinguish whether the property has been damaged to a point that it is no longer safe to reside in, or if the property is damaged but is still deemed to be safe to reside in.

For homeowners in sectional title complexes, the aftermath of the floods includes uncertainty and anxiety about whether the sectional title scheme that they have invested in will end as a result of the damage or whether repairs should be undertaken – and what say they have in these considerations.

According to specialist sectional title attorney and BBM law director Marina Constas, the end of a sectional title scheme as a result of physical destruction is covered in Section 17 of the Sectional Titles Schemes Management Act (STSMA). “What happens when the unthinkable happens? Owners need to know that the scheme will be deemed ‘destroyed’ if the building or buildings that comprise the scheme are actually destroyed.

If the leased property is no longer safe to reside in

If the property leased is no longer structurally sound, it is important to follow all evacuation procedures to guarantee the safety of all parties. In respect of the premises, it is imperative to consider the liability clause in your lease agreement, says TPN Group.

Therefore, due to the floods being beyond the control of either party, neither the landlord nor tenant should be entitled to claim for damages as a result of the floods. The lease shall terminate immediately, and any deposit held in trust by the landlord or property practitioner should be released back to the tenant as per the lease agreement, considering the circumstances.

In terms of sectional title schemes, section 37 of the Sectional Title Act, explains that the Body Corporate is responsible to repair damage to the common property. An example in this respect would be any damage to the roof or foundations of a complex as a result of the floods or rain.

If the damage is limited to certain sections and common property areas, the STSMA makes provision for members of the body corporate to decide, by unanimous resolution, if the sections that have been destroyed should be rebuilt and the scheme reinstated, or whether it would be expedient for the scheme to continue its life without the one, two or five units that no longer physically exist, says Constas.

In instances where the leased property is damaged by natural disaster such as a flood or violent storm, the liability in respect of the repairs to the immovable property, such as structure and permanent fittings, lies with the owner of the premises.

“If the members are unable to reach consensus by unanimous resolution, then any interested party can approach the court for an order as to whether the entire building should be rebuilt or reinstated or only a portion thereof – without the units destroyed by the floods, says

If the property is in the process of being bought

In the case of property being bought, liability is dependent on when the property was transferred. Most offer to purchase agreements contain a clause which determines when risk transfers to the buyer. In the TPN OTP, the clause on possession and risk explains:

“Legal Possession of the property shall be given to the buyer on the Registration Date, from which date all benefits and risks in respect of the Property, including the liability of all rates, taxes and levies on the Property, shall pass to the Purchaser, subject to anything to the contrary that may be contained in clause 9.2.” (Clause 9.2 refers to Vacant Occupation).

Constas explains that unit owners are also empowered to pass a unanimous resolution – or the court can make an Order if they are unable to agree – concerning a number of other matters connected with the destruction of the building.

“These include how insurance monies received by the body corporate must be used and decisions on the payment of money by or to a unit owner or owners. The owners can also pass a resolution to amend the sectional plan of the scheme to make provision for an increase to the common property as a result of the destruction of a unit or units or, alternately, a decrease to the common property.

Additionally, she says owners are empowered to resolve to vary the participation quota of a section or sections, and they may impose any conditions,” she expands.
“There are several people and companies that may have interests in the dissolution of the body corporate – or the end of the sectional title scheme – not least of which is the insurer of the building or any part of the buildings, and the STSMA grants the insurer the right to intervene in the proceedings,” Constas concludes.